People everywhere are used to living in boring boxes piled on top of each other. There are some people who don't want to settle for that and have created the most oddly shaped houses to live in. Take a look at these funny, amazing and extraordinary buildings and houses and let us know in the comments would you like to live like this and in which one.

#1 - The Shoe House - South Africa
It must be the dream of every female on this planet not only to own a lot of shoes but to actually LIVE in a shoe. While in the 90's it was even used as a home, today it is only a museum displaying the wood works of the original designer and builder Ron Van Zyl. 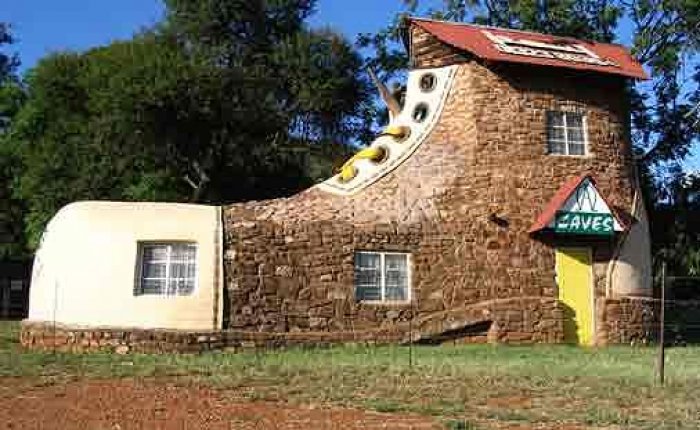 #2 - Skinny House on Cliff - Japan
Taking the very small countries aside, Japan is one of the countries with the highest population density per square mile. The architects from the 'Shuhei Endo' office took it into consideration when they designed this skinny house which is place at a cliff where a commonly designed house wouldn't have enough room. 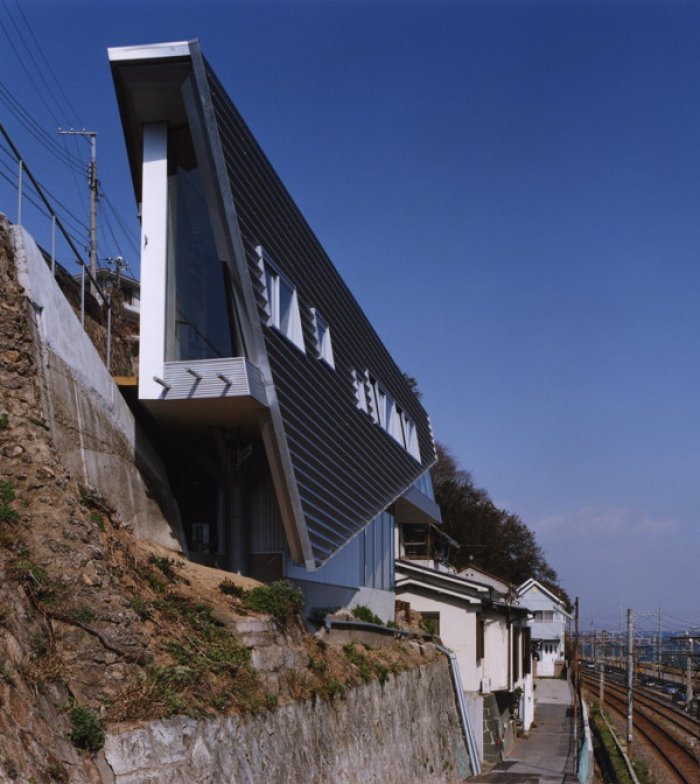 #3 - The Cat Kindergarten - Karlsruhe, Germany
When the crazy cat lady lives in a house I bet it would look like this one. But this is not a house for daily living instead its a kindergarten designed by the children’s book writer 'Tomi Ungerer' and located in Karlsruhe, Germany. In the back is a slide which resembles the tail of the cat which is pretty cool in my opinion. 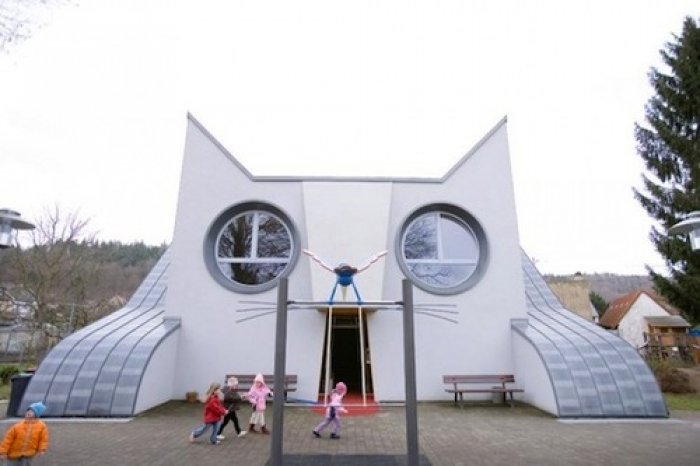 #4 - Teapot House
I don't know if there is still someone really living in this cute teapot house but I have seen pictures where the door is open and you can see furniture inside. Looking at the outside it has seen better days already and needs at least a new paint job. 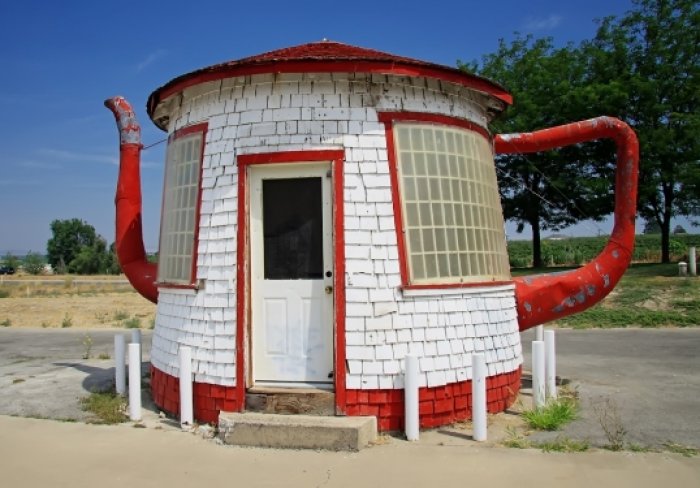 #5 - X Shaped House - Barcelona, Spain
The rooftop of this house (designed by 'Cadaval & Sola-Morales' and located in Barcelona) is on the same level as the street. This way the living area is not exposed to bystanders and more private while the magnificent view from the lower levels is kept intact. I especially like the pool area which fits in with the shape of the X. 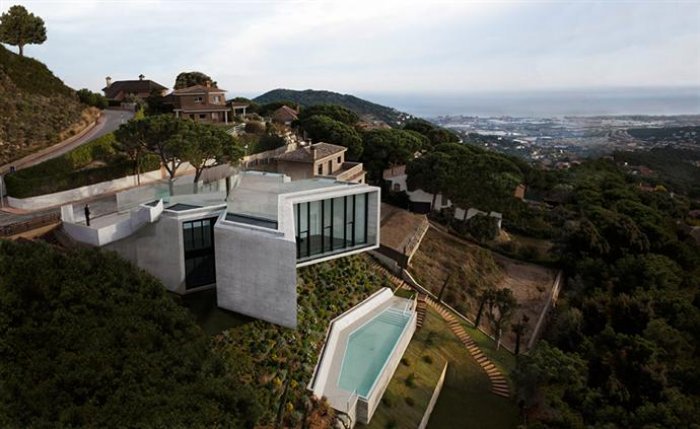 #6 - Spaceship House - Tennessee, USA
When I saw this Spaceship the first time I was immediately remembered of the scene in Spielberg's E.T. when the door opens because the entrance door of this house is exactly designed that way and the owner/architect was most probably inspired by the movie. The house is located in the mountain area of Chattanooga in Tennessee, USA and can been seen from the street. 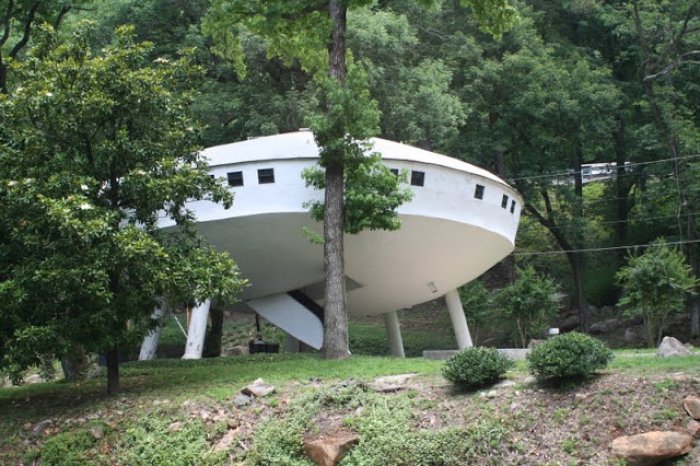 #7 - One Log House - USA
This house is not only made up to look like a giant log - in fact it IS a giant log of 13 foot diameter. It took two people 8 months of hard work to hollow it out. No one ever lived in this one room house but it served well for a lot of other purposes. 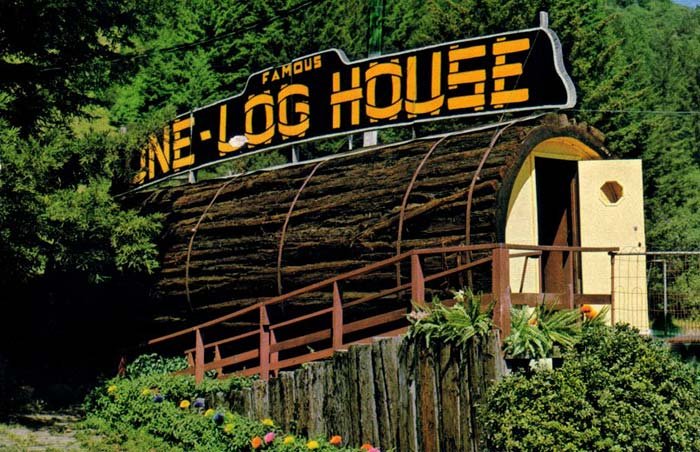 #8 - The Steel Pig House
Wow it must be pretty hot inside this house since its walls are completely made of 110 tons of steel! Robert Bruno an architect and designer needed 23 years to make his dream house come true.
I would call it 'The Rusty Oink' - have an even better name? Leave me a comment! 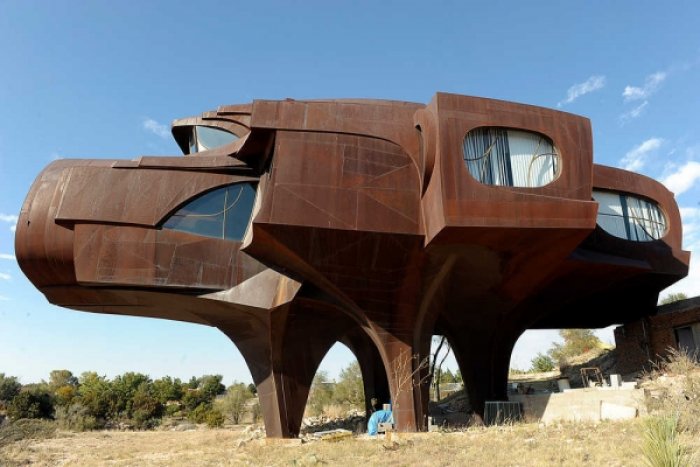 #9 - House In The Clouds - London, England
This is not the idea of a modern architect instead its been like this since 1923 when it has been build. Due to the need of water supply it was unevitable to build a water tank. But the city fathers didn't want to have an ugly structure destroying the view of their hometown. Long story short: They disguised the water tower whilst placing a structure on top that looked just like all the other houses in the area. Since the water tower is out of order an Inn took place in the house which is frequently visited. 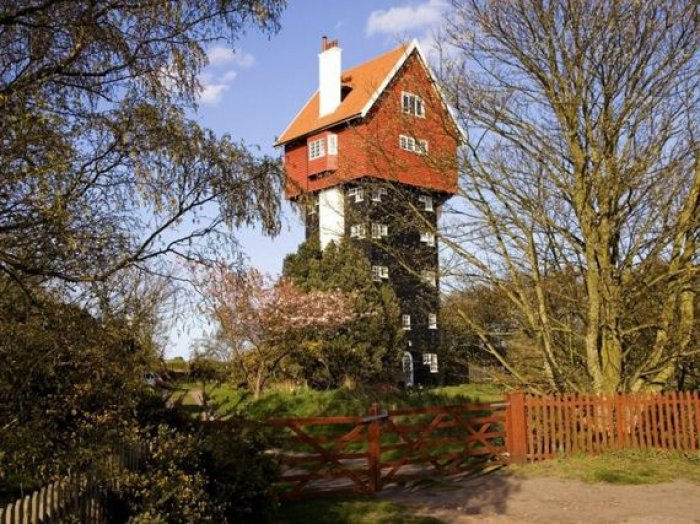 #10 - Cube Houses - Rotterdam, Netherlands
Even though I'm not a fan of same looking houses, these really look cool especially when you know that they are build on top of a pedestrian bridge. The design is from the 70s by architect Piet Blo who constructed similar ones already before in another town. 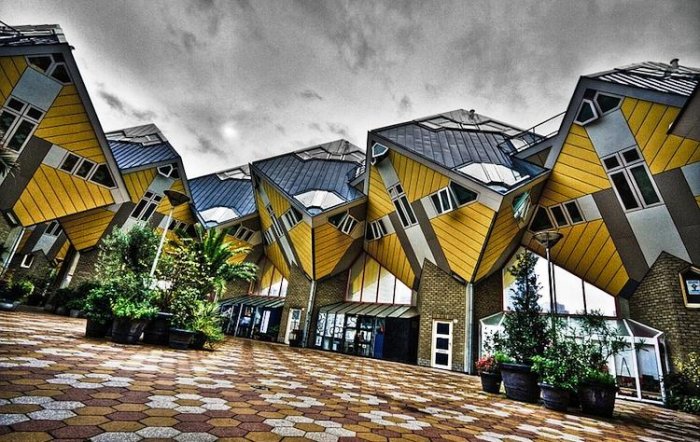 #11 - Stone House - Portugal
Built between two giant rocks you'll feel like Fred Flintstone living in this one. When the first pictures came to the public most people thought its a fake/edited picture. But then Newspapers around the world visited and featured it in their prints. Today its a well known tourist spot attracting several thousand visitors each year to take a look and some pictures. #12 - The Crooked House - Sopot, Poland
This crooked house is not an optical illusion nor is it made up with some photo editing software. It has been designed by the polish architect 'Szotynscy Zaleski' and its no wonder that it became the most photographed building of whole Poland in no time. 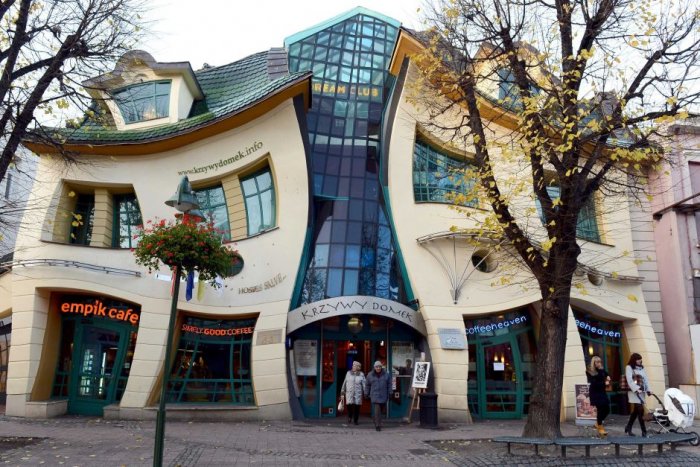 #13 - The Bubble House - Cannes, France
Responsible for this futuristic design was Hungarian architect 'Antti Lovag' who built it in 1989. The only thing I'm missing between all these nice round shapes is a water slide going directly into the pool from one of the roofs.

Dear readers - which is your favorite design/shape and why? Let me know! 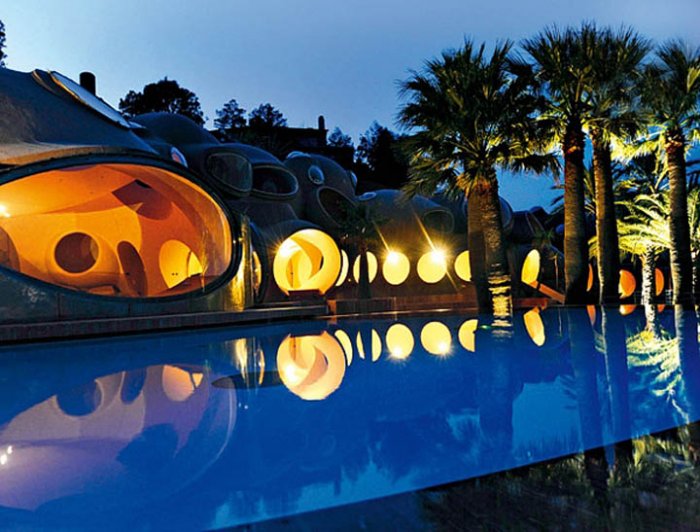